is an action-packed shooter game in which players will form a squad to join battles and trade in-game NFT weapons.

The AMA session was held in PolkaFoundry’s Telegram Channel with the participation of Mr. Don Zhu - Founder of THE KILLBOX

. The team provided information about the project’s features, some special insight into the game vision, upcoming plans, etc.

Below is section 1: Guests and Project introduction

Host: Alright, without further ado, let’s start off the AMA with the Guest and Project Intro

Host: QUESTION 1: To kick off the AMA, Can you give us a quick introduction about yourself and the team behind the project ?

I am Don Zhu - Founder of The Killbox Game. Don created an overseas game trading platform called Buyboe.com in 2006, managing 200 customer service specialists and earned tens of millions of USD in revenue. Don has also established a gold farming studio consisting of 500 employees which provides gold and items for WOW(World Of Warcraft) players and has organized hundreds of gold farming studios in other regions to serve overseas game players. His studio is one of the largest gold farming studios around the world.

In 2013 - 2015, Don established Ugamehome.com which is a game-operating platform. It has operated more than ten games in the U.S. and Europe, some of which include Dragon Call, Hero Throne, Navigate and many others. They have earned tens of millions of USD in cumulative revenue.

In 2015, Don and his team members started to develop The Killbox Game, which had been released in Vietnam, Middle East, Arabia and many other countries. TKB project has gained 50 million USD in cumulative revenue.

Over 9 years of experience in game design. As the main designer of G-Bits gaming company, Jackson is responsible for the interesting and exciting gameplay of TKB Game.

Over 10 years of development experience and has overseen the operation of a dozen of games, like Hero Throne, Devil-War, the TKB and to name a few.

Over 12 years of programming experience and was involved with the development of several games, like Spirit World, Warriors Online, the TKB and to name a few.

Over 9 years of experience in art production and is responsible for the direction of cool weapons in TKB Game.

Host: WWooww, such impressive individuals. I feel so excited with today AMA

Mr. Don Zhu: Honored to be here with Red Kite community too!

Host: So What is your NFT weapon system? How do users obtain benefits owning it? How can people play to earn?

Mr. Don Zhu: Players will be able to earn KBOX tokens by owning NFT weapons of T1-T6. Higher level and quality of the NFT weapon will bring more hash rates to the players.

The total hash rates of the player will be calculated by adding up the hash rates of all his/her NFT Weapons. The amount of KBOX tokens a player can earn is determined by the proportion of the player’s total hash rates in all players’ total hash rates.The total amount of the Play-To-Earn ecosystem will be 3,600,000,000 KBOX. The Play-To-Earn ecosystem will enter the creation period at the beginning, with the mining pool of 100,000,000 KBOX. After that, the amount of KBOX tokens released for the first year will be 1,700,000,000. After that, the annual circulation will be halved every next year. NFT weapons of T0-T3 are required items to upgrade NFT weapons of T4-T6. The quality of NFT weapons is divided into seven levels (T0-T6): Black→Mediocre → Good → Excellent → Rare → Epic → Legendary. 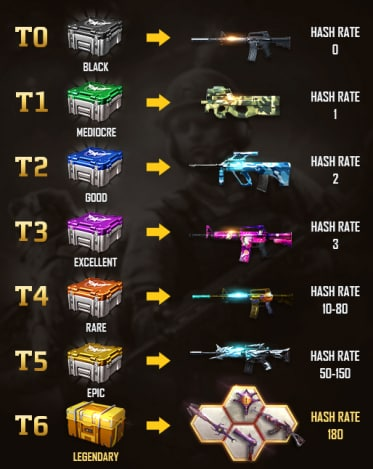 Host: Thanks for your sharing

QUESTION 3: Can you have a sneak peek your development plan for the next few months?

Mr. Don Zhu: Here’s our plan for TKB in the next couple of months: 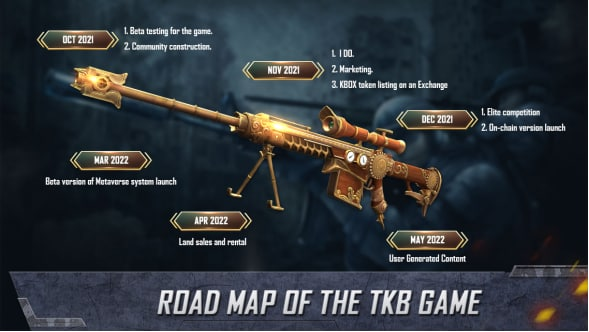 In segment 2, the Red Kite team picked questions from the Twitter announcement to answer in this AMA session.

Earlier, our team have picked questions from this announcement HERE:

Mr. Don Zhu:: Excited to see what people are curious about us!

Host: QUESTION 1 :@Liajiawei9
What are the utilities/functions of $KBOX in your ecosystem ? Where and when can we buy it ? Is it for game currency, use for farm/stake, or maybe for governance system? 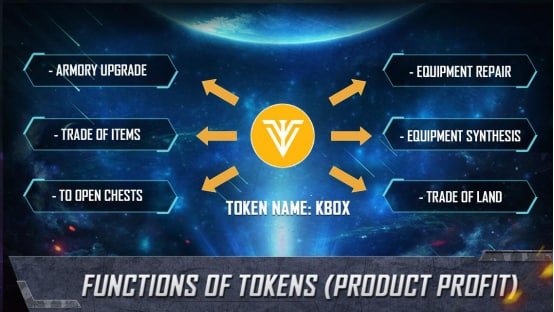 We have designed several usage of KBOX token:KBOX sale is available from IDO and TGE:

1.The hash rates of NFT Weapons of T1-T6 will generate KBOX tokens on a daily basis. The higher the quality and level of the equipment, the more KBOX tokens will be generated.

2.Users can obtain KBOX by participating in specific competitions in-game.

3.Staking KBOX in the Marketplace will help players gain the chance to buy keys

Host: QUESTION 2 : @ali_abdaalii
There are many NFT and Metaverse projects emerging recently. So users are more selective when participating in new platforms. What are your significant features that make The KillBox outstanding from other projects ?

Mr. Don Zhu: TKB Game is the first FPS game with a Play-to-earn Ecosystem on-chain. The Play-To-Earn ecosystem will enter the creation period at the beginning, with the mining pool of 100,000,000 KBOX. After that, the amount of KBOX tokens released for the first year will be 1,700,000,000. After that, the annual circulation will be halved every next year.

Key Features of the TKB Game

Different real-world guns to choose from.

Product Features of the TKB Game

countries’ cultural customs. Players from all over the world have access to their own local guilds and Streamers.

The ability to obtain a limited number of chests equipped with rare weapons sets that have exclusive special effects in battles.

Host: QUESTION 3 @Patriciade81
By referring my friends, Can I earn extra income from The KILLBOX platform ? How much will you allocate for me per one referral that I introduce? Please give a well detailed description about this referral program So that I can enter it? 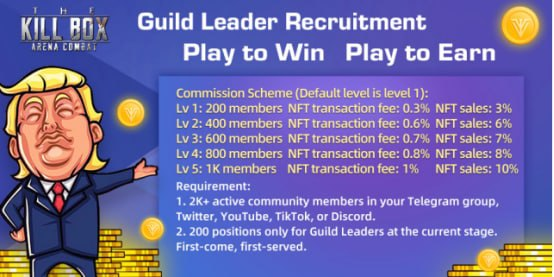 5 guild levels from 1 to 5. The guild level decides the guild capacity. The higher the guild level, the more members it can hold and the more commission a guild leader can earn when members trade NFT equipment in game.

Requirements to Upgrade the Guild

1.How often do the members trade NFT;

2.How many tokens are staked by members;

3.How many treasure chests and keys are held by members;

5.How much NFT equipment does the guild have;

6.How many treasure chests have been opened by the guild;

7.The detailed rules will be announced when the on-chain version is launched.

Host: QUESTION 4 :
@PiloT9804 To start playing Killbox game, how much money do I need? Is it required that I have NFT characters or a specific number of $KBOX? I have "android 11 and SD870"is my phone able to Run Your Game? When it will available on Play Store?

Mr. Don Zhu: The Answer is no. All you need to do is download, register and play. It’s totally a free to play and play to earn game! You can join the combat or participate in campaigns to win different rewards of NFT weapons or KBOX tokens.

Host: THE LAST QUESTION @argan898
What are the ways for your project to generate revenue in the long run? What is the progress of business development and what are some of your commercial partnerships?

Mr. Don Zhu: As mentioned above:

Free to play, play to earn.

Players join the combats, competitions and participate in different kinds of campaign and gain Game items including NFT weapons and KBOX tokens. And all items are tradable in the Marketplace. Owning NFT weapons of T0-T6 will earn KBOX tokens on a daily basis. And NFT weapon upgrading will help increase hash rates, which accordingly get much more portion from all players’ hash rates, gaining more KBOX tokens for players.

For busness development, we will make use of social communities and partnership with game guild, kols and VCs: We already have 52k twitter followers and 53k members in the TG group. In addition to twitter and telegram, we’ll use other ways, such as YouTube, Instagram and Facebook to pull more users to the game. Also, we’ll make full use of our large user bases of the traditional version (DAU: 200,000, MAU 1,500,000). We’ll encourage original players to experience the on-chain version with free candies.

We set strategic partnerships with game guilds, such as good game guild;. Announcement of partnership and activities, like kicking start scholarship programs with guilds will be released on official website and social media.

In segment 3, PlaceWar TEAM answered live questions from the community.

Host: Thank you everyone for your overwhelming support. The stage is now yours Mr Don Zhu

1/ Are you planning to promote your project in countries / regions where English is not good? Do you have a local community for them to better understand your project??

Yes. TKB game is the first FPS game with play-to-earn ecosystem on-chain. Blockchain is without boundaries. We have set several region TKB communities:

2/ Does your project support staking program? if yes. How does your stake system work? What is the requirement for users, if they want to stake in your platform?

3/ Do you have any plans to attract non-crypto investors to join your project? Because the success of a project attracts more investors who haven’t yet entered the crypto world. What are the plans to raise awareness about your project in the non-crypto space.

Yes. TKB is a Game project. Actually TKB game was launched since 2017. It has gain countless players all over the world. We will encourage all our players to enter the crypto world, and attract new players from the crypto world too.

You can buy KBOX from IDO and TGE

4/ Is your platform suitable for crypto beginners? Or does it only limited for professional users ?

TKB game is accessible to everyone. This is also our vision. If you’re a gamer, download to enjoy the exciting 360 degree arena combat and earn profits! If you’re a crypto, own NFT weapons and hold KBOX for long-term. We will make frequent update in-game to push the market and gaming process according to the roadmap.

Thanks for your time! I really enjoyed this AMA with Red Kite community! Hope we can get more collaboration as partners!